38 years of experience in the manufacturing of IEF carrier ampholytes, e.g. Sepalytes and GelStick PAG film, and sustained efforts to optimise IEF separation performance have led to the new product we call

ProPhyl Air is a new type of gel matrix with unusual physical properties which, in combination with our self-produced carrier ampholyte (Sepalytes), represents an excellent resolution of native protein mixtures in isoelectric focusing. ProPhyl Air improves the solubility of proteins because it carries charged groups.

Result of Alzheimer’s samples (2nd from right) made from the BlueHorizon horizontal compartment bed chamber to sharper bands in general and also more bands. Its use could therefore be revolutionary for those working with a wide range of proteins.

The HIEF electrophoresis technique separates molecules based on their hydrophobicity and isoelectric point. Thanks to matrices that operate under less denaturing conditions, HIEF is useful for analysing proteins while maintaining biological activity.

ProPhyl Air and its properties

The hydrophobicity of the ProPhyl Air matrix leads to an increased retention of proteins during migration compared to the common and globally used polyacrylamide. This indicates intensive interaction of the non-polar groups in the ProPhyl Air matrix with the outwardly directed polar and thus hydrophilic protein groups.

As a result of this interaction, proteins and protein mixtures that have different charge states on their outer tertiary structure are delayed in their migration to a greater or less extent, thereby producing an improved separation behavior in the ProPhyl Air matrix and also preserving the native tertiary structures of the protein.

The non-polar molecules on the ProPhyl Air matrix can be referred to as „protective groups“. Based on the example of EPO and the IgG protein in CSF, our hypothesis supports/proves the fact that in the ProPhyl Air matrix the separated proteins, or the isomeric subgroups of the proteins, are shown as clear, distinct bands, in contrast to the polyacrylamide gel, in which the bands are blurred and can often only be observed as a protein cloud (denaturation). 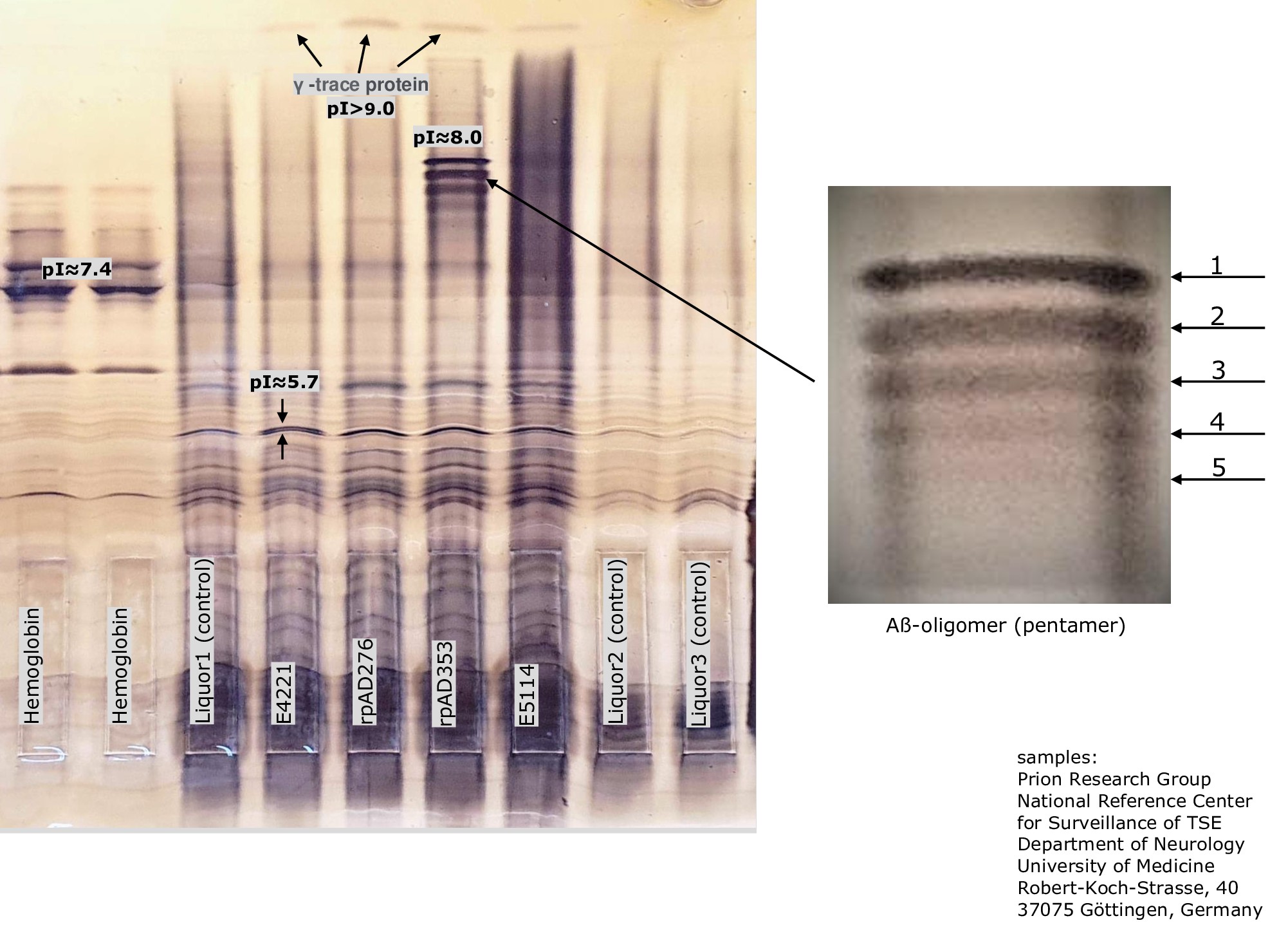 ​Biological function of amyloid beta Aβ production
Alzheimer’s disease is characterized by abnormal accumulation of the Aβ protein, which is important for memory and cognition, in the brain regions. Aβ monomers can form higher-order assemblies ranging from low-molecular-weight oligomers, including dimers, trimers, tetramers, and pentamers, to midrange molecular weight oligomers, including hexamers, nonamers and dodecamers, to protofibrils and fibrils.
https://www.nature.com/articles/aps201728

Diagnostic Standard for HbA1C in Diabetes

Conclusion
According to our results so far, it seems that acrylamide has a denaturing effect on certain proteins in horizontal isoelectric focusing
(see also http://www.protec-biosep.de/erythropoietin-epo/) 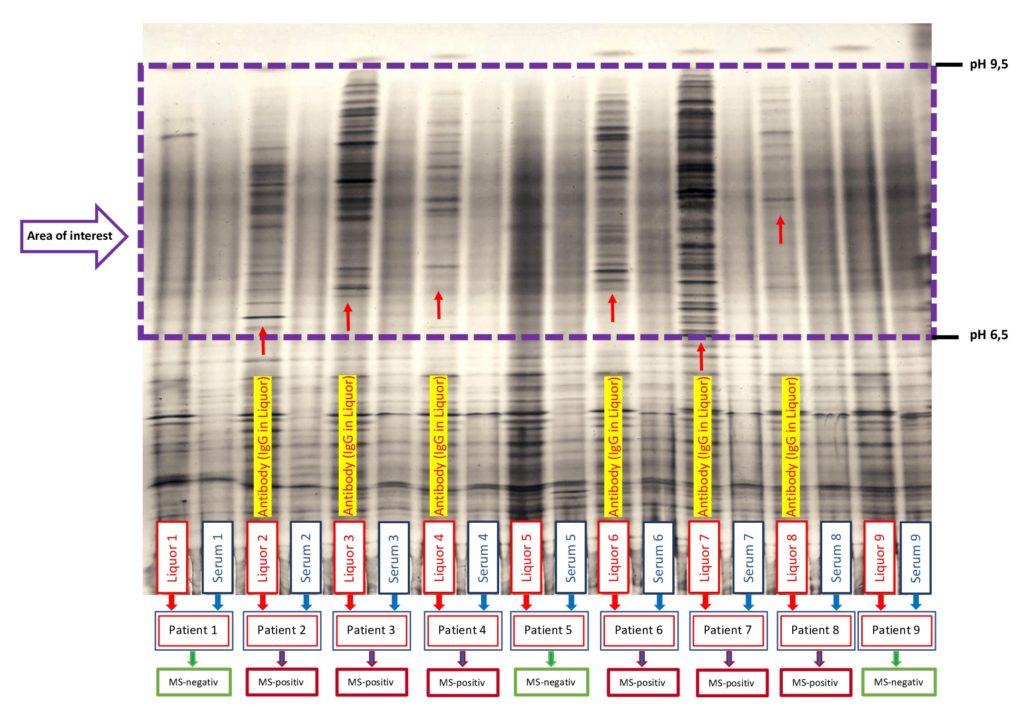 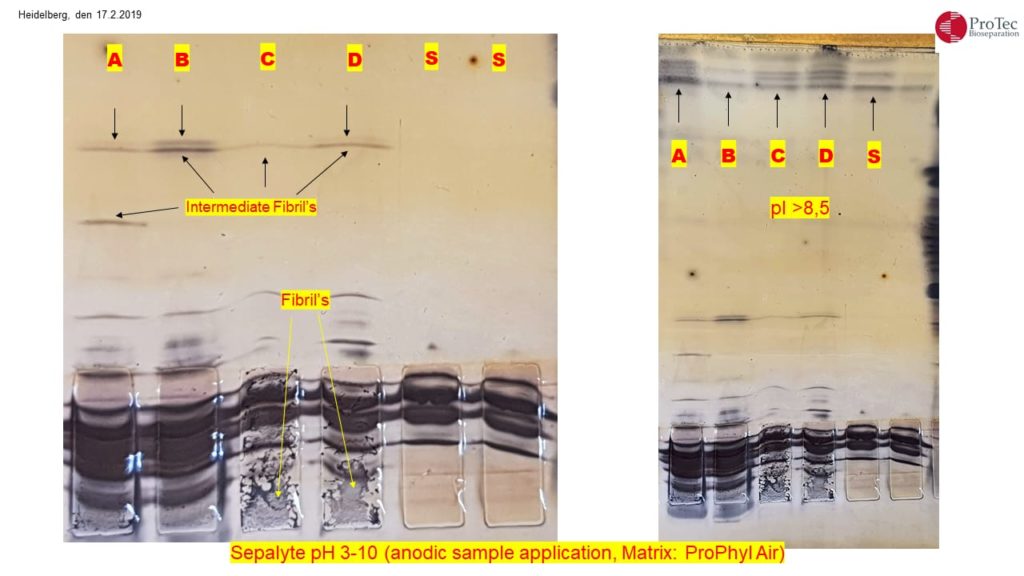 First ever native protein separation of alpha-synuclein, a protein believed to be responsible for Parkinson’s and Alzheimer’s disease, in cerebrospinal fluid (liquor, CSF) by hydrophobic interaction isoelectric focusing (HIEF)

With the help of ProPhyl Air it is now possible to discover native proteins that were previously undetectable with the conventional acrylamide gel matrix used worldwide for 60 years. Examples of such proteins are biomarkers for cancer, Parkinson’s disease (PD), Alzheimer’s (AD), and EPO. ProPhyl Air also exceeds the capabilities of the IPG matrix (2D electrophoresis) in certain areas, e.g. membrane proteins, because of excellent protein solubility in the gel matrix and superior performance in the first dimension of 2D.  The comparative advantages of the new ProPhyl Air gel matrix are its speed and flexibility.

How to cast your own horizontal IEF gel

Need some advice?
No problem, just write to us!
Email: m.demharter@protec-biosep.de